The Adventure of Freemasonry

It has always bothered me a little that when I was brought into the Craft, I had to do little more than be interviewed once and show up for my degrees. The committee I now sit on requires candidates to write personal statement letters and show that they are duly and truly prepared. While the benefit of hind site will never allow me to write the letter I might have written in their shoes, I am now able to reflect on the things that brought me to where I am now, and put some of the pieces together with more clarity thanks to the limited wisdom that is inherent to the passing of time, as brief as it may be in my case. And, while I may never be able to elucidate or even identify all of factors that have brought me to where I am today; given the inherent shortcomings of self-reflection, I need to give credit where I know at least some credit is due. Ergo, I must thank Indiana Jones. 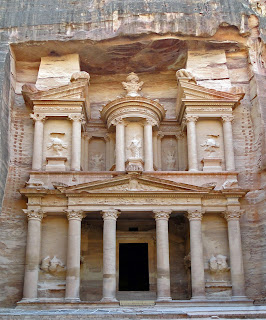 Today, we all know Al Khazneh. Even if you don’t think you do, I can heartily assure you that you’ve seen it. Literally meaning “the treasury,” it is most famous for being the entrance to the temple housing the Holy Grail in Indiana Jones and the Last Crusade. As a child, growing up well before the internet was in every home and took most of the mystery out of life, I remember watching Indy ride up to what had to be a model, or a very elaborate set. Of course, in the years that have passed since my first viewing, childhood naivety has succumbed to education, but there was an indelible mark that still hasn’t faded. For reasons that I hope become apparent, years after finding out that it wasn’t just a set, I was very pleased at the consolation that the origins of Al Khazneh have become largely lost to history.


From that moment forward, I had always told myself that one day I would make a great discovery. I became convinced that somewhere out there, there was something lost that I could find. Even then I knew that I would not be the one to locate the Ark of the Covenant, the Holy Grail, or anything of that ilk. As luck would have it, while I was yet in grade school, explorers conclusively proved that they found the legendary city of Troy. Hell, as recently as a few years ago, people seem convinced that the Ark of the Covenant was in a church in Ethiopia. And, thanks to Dan Brown, in the popular mindset the idea of physically recovering the Holy Grail seems outdated, laughable even.


So, life continued, and I began to understand why H. P. Lovecraft devoted so much of his writing to lamenting the fact that in an industrial and then post-industrial age, people had forgotten how to dream. There was nothing left to discover, unless you wanted to leave the planet. With sincere apologies to any crypto zoologists reading this, Loch Ness and Bigfoot really aren’t worth my time. The only mysteries I could find within my realm were historical in nature, but to date I have not resolved any of the questions that have haunted us ever since we forgot the answers.


None of this, however, could quench the coals of that fire. The fact remained that I needed, on an existential level, to explore. So, when a friend joined a local lodge, I did some research, if only for the purpose of my own education. I had no idea what a Freemason was, or did, or was supposed to be. The one thing that I found was that of all the different things I heard, the only aspect that seemed self-evident was that no one could agree on the where, when, or how, regarding the origins of the Craft. Even with the overwhelming evidence that the Craft emerged as operative stone mason guilds fell by the wayside, it seemed unlikely that anyone could ever flesh out the details.

From the day I knocked on the door of a lodge, it quickly became apparent that I had found what I was looking for, at least to some degree. There were allusions in the ritual that, when I asked for an explanation, none could give me a straight answer. While I had known going in that the origins were shrouded in mystery, I would never have guessed that even the functional parts of standard ritual still held their secrets back from men that had joined before I was born.


So it was that I started down my path, the adventure of which thrills me more today than ever. Watching those films again, with a new perspective, I began to piece together similarities that I hadn’t previously understood. Indy was a treasure hunter, and throughout the first film little more. However, in Last Crusade, you can see a different side. While ostensibly he was searching for the Holy Grail, the film ends without him being able to possess it, yet ends on what is unquestionably a positive note. He learns to let go, learns that it was the journey that counted. While the story of a father-son relationship is hardly unique to that film, it marked a change in the franchise. In what I consider to be the most remarkable part of the film, Indy seems to have gained more through his actions than he could have ever gained by possessing the object he was after. And, while I am no Indiana Jones by any stretch of the imagination, in trying to satisfy my quest for knowledge, for exploration, for adventure, I eventually came to find that I was discovering more about myself and what was truly important, things that had been in front of my face the entire time. Qualities that I like to think I had always possessed, but did not appreciate or acknowledge, rendering myself incapable of trying to improve them.


That was the moment that I realized Freemasonry was an adventure of two parts. The first adventure is an internal one. An exploration of ourselves, realizing what we are capable of, improving it, and pushing ourselves beyond our ill-perceived limits. The other adventure is the Craft itself. Scholars of the last century have called us the last vestige of an esoteric tradition that goes back beyond the edges of what historians can recall, but is still deeply engrained in a part of us that many have forgotten or have chosen to ignore. I, for one, will not argue with them. Within the ritual there are layers that the wisest among us may not yet perceive. That which is lost but may one day be found is perhaps the lynchpin of the entire system. It teaches us allegorical lessons, refers to actual knowledge that we may well have lost, and even applies to each of us in our individual search for whatever it is that we are seeking.


Indy, for being an icon of film, was quite the everyman. His education led him down perilous paths as he searched for things that had been seemingly content to lay undiscovered for the rest of time. But he had a drive to rediscover that which was lost, and that desire bore him past those trials. He understood that if they were out there, we could find them. Thus it is for every traveling man. All of us have the tools necessary to dig as deep as we would like. We do so knowing that we will likely not discover that which has been lost in the most literal sense of the word, but can rest well in the knowledge that we may find things that are even more important along the way, hidden treasures that only the individual can know he is looking for. As far as adventures go, mine may not be film worthy, no artifacts rest in museums due to my efforts, and my name is not a byword for epic tales, but it’s an adventure that has led me to greater treasure thus far than I could have ever expected, in every sense of the word. And I anticipate that it will continue to do so until the day my own adventure must necessarily come to its end. 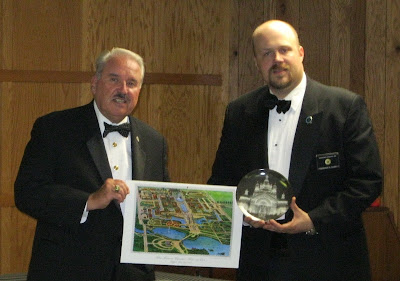 On August 24, 2011 the Brethren of Harmonie Lodge had the honor of hosting R:. W:. Paul S. Sabo, District Deputy Grand Master of the 1st Erie District, representing the M:. W:. Vincent Libone, Grand Master of Masons in the State of New York. R:. W:. Sabo is a tireless advocate for Freemasonry in Western New York. He has proven himself to be a kind and generous leader, who always has time for his Brethren and the Lodges under his supervision.
R:. W:. Sabo has done an exemplary job of cultivating the potential of the Lodges in the 1st Erie District - and it shows. His forward thinking leadership in support of Ritual Excellence, Masonic Education, and Charitable Endeavors have set the tone for how an upright man and mason should act before God and Man. He is also the Master of the Western New York Lodge of Research.
At his official visit, W:. Ted Clark, Master of Harmonie 699, presented R:. W:. Sabo with a 1901 Pan-Am Exposition commemorative plate and map. Held during the hey day of Buffalo, this international event was planned and organized by a good number of Fellows of the Craft. The Mayor of Buffalo was none other than Harmonie Lodge's secretary, Bro. Conrad Diehl. The key note address was give by the President of the United States, Bro. William McKinley. After his unfortunate assassination, Bro. Teddy Roosevelt, then V. P., was sworn in as President at the Wilcox Mansion on Delaware Avenue.
The Exposition saw the first long-distance transmission of electricity from Niagara Falls to Buffalo, NY. Thus the normal blackness of night was replaced by a city of lights. And as Nicholai Tesla illuminated Buffalo with light, so too does our District Deputy Grand Master bestow the Light of Masonry throughout the 1st Erie District!
Posted by Harmonie Lodge No. 699 at Wednesday, September 21, 2011 No comments: 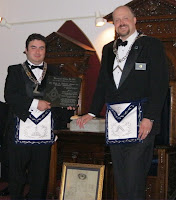 Bro. Daniel J. Di Natale was bestowed this award for his exemplary service to the Master, Wardens and Brethren of Harmonie Lodge.
Bro. Di Natale has been the president of the Ronald J. Keel Fellowcraft Club for two years. In his tenure, he has substantially increased the Ward A. Peterson Benevolence Fund while also leading fundraising efforts, allowing for major donations to the Food Bank of WNY in 2010 and the Masonic Medical Research Lab in 2011.
Posted by Harmonie Lodge No. 699 at Wednesday, September 21, 2011 No comments: 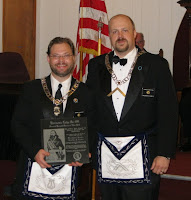 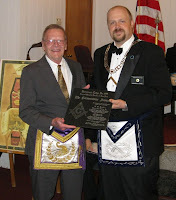 It is my great pleasure to unveil the new and improved Ronald J. Keel Fellowcraft Club website designed by W:. J. C. Litwin and Bro. Michael Hacker. Special thanks to Bro. Greg Stewart for his amazing artwork.

Click the link below to see what all the fuss is about.

I'll see you around the quarry, 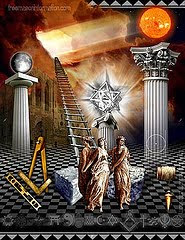 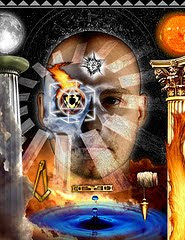 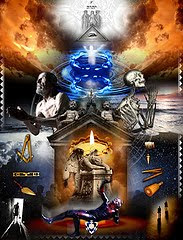